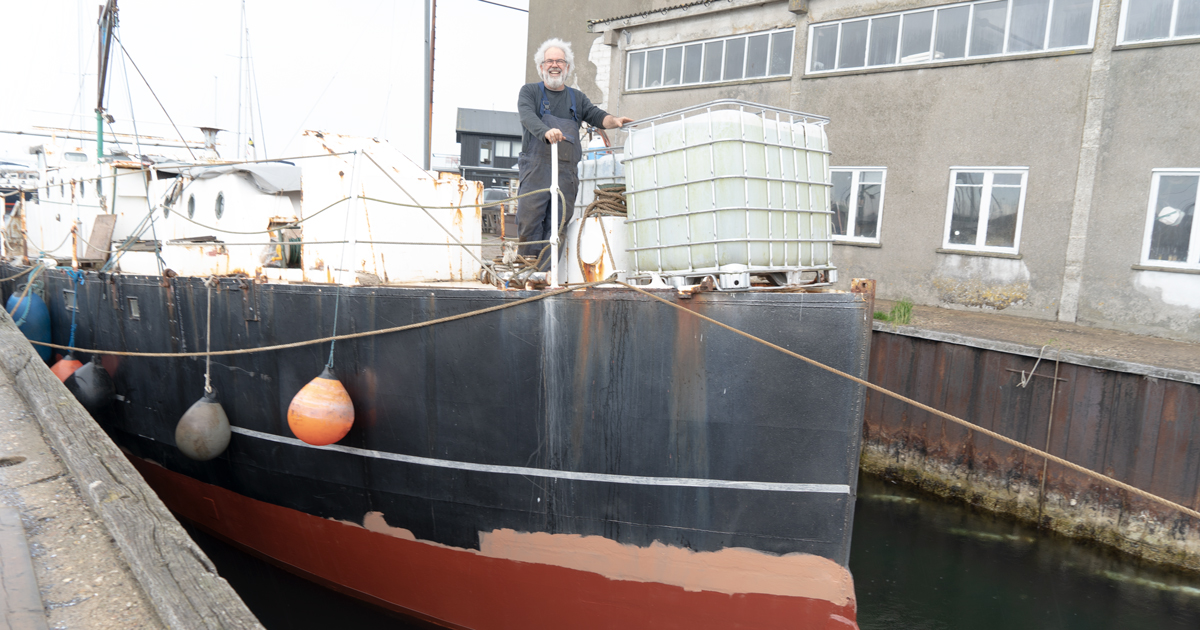 Written by captain and builder of Lo entropy, Geoff Boerne

On the coast of the Port of Hundested in Denmark SV. Lo Entropy is feeling the sea for the first time in years after undergoing massive constructions and continuing to remodel her interior.

Our contracted goal as a partner in the Dual Ports project is to prove or disprove the feasibility (economically and operationally) of cargo transport under sail or wind power. In this regard, I am optimistic that we shall succeed now that there is an appetite for green EU transport.

I say this as having worked with the vessel SV Lo Entropy in developing economies; we survived when diesel was 18 US cents per litre, and even then, fossil fueled formal maritime transport was the exception. Simply as the economies we served could not afford modern shipping. It was a costly matter and as a result, transport continued despite the lack of modern maritime transport options; locally made vessels with some using engine, some sail, but all operated at extremely low costs due to their components on the whole been locally sourced, particularly the sailing vessels, which exceeded the need for modern shipping.

In the EU, we see our competition mainly as road transport, trucks and ferries, and to some extent short sea shipping. Our aim is to become a “sea truck”, carrying twice the tonnage and capacity of a normal legal EU truck at a lower cost, despite being low to zero CO2-emissions or green transport. Should we achieve this, and we believe we can, then we can reduce the dependency on road transport in some cases, and further, act as part of the supply chain in a multi modal transport scenario.

The benefits of achieving this goal could be many, as we would be offering possibilities for short sea transport as well as removing truck journeys from the road, creating maritime employment as well as utilizing small ports which will soon be gentrified if not offered an economically viable alternative to continue operating as a port.

The benefits of a fleet of small vessels sailing cargo around the coasts of Europe are many; economic, social and emissions massively reduced where they are utilized, which is a crucial and a desired alternative for cargo transport consumers; all of which could be spin off’s of our primary goal within the Dual Ports project.

However, in terms of CO2 emissions, we will not be completely zero, as we will still need engines for entering and leaving harbors, windless days and domestic operations, etc., which, although less than any other cargo transporter by quite a margin, is still not zero.  This is where the hydrogen concept and our secondary goal comes in.

Hydrogen or a related carrier such as ammonia might well be the fuel of the future, but in our case, we see green hydrogen as an energy storage facility.

We have the means to make a lot of hydro renewable energy via our powerful free spinning propellor whilst we are using the wind to sail/propel our vessel; so much so that we do not have the capacity to store this energy in batteries without having to carry a vast number of batteries and so much that it would affect our sailing and cargo capacity abilities.

So, what we would like to do is, despite the energy losses in this type of energy transfer, use our onboard produced renewable energy (hydro, wind and solar) to make hydrogen, store it and use it via a fuel cell to create electricity to propel the vessel via the propellor when needed (entering and leaving port, e.g. when there is no wind to sail by) as well as for domestic onboard needs (e.g. winches, cooking, heating), thus making our operation truly zero emissions.

We believe that our hydrogen concept can play a small part, in tandem with other green maritime technologies, in forcing green change on the maritime transport industry via cost reductions. Our hypothesis is that we can make enough energy using our free spinning propellor whilst we are sailing to reach zero emission by using the wind for propulsion and this energy to produce hydrogen to be stored and then used for both propulsion and domestic needs.

There are already means to wind propel ships using ventifoils among others. Using such technologies, ships could produce their own hydrogen/ammonia whilst they are in favorable wind conditions. It might mean some routing changes, but that’s a planning issue and can easily be dealt with. This was shown in the loss of Suez Canal transits when oil prices dropped, and ships rerouted around the Cape Agulhas using more fuel and taking more time but still reducing cost.

The main factor here is that a ship producing and storing even 20% of its fuel can undercut a competitor if they will not do the same, and this cost reduction will force the change needed on this industry, rather than legislation.

To this end, we have invested in a hybrid drive, which allows us to be propelled by both a diesel engine as well as an electric motor. It has power take offs (PTO’s) for hydraulic pumps which we can use for steering, winches, etc. Most importantly, it allows for our free spinning propellor to power the PTO’s and the generator. The electric motor has a double function as it becomes a powerful generator when not used as a motor whilst under sail or when the diesel engine is been used.