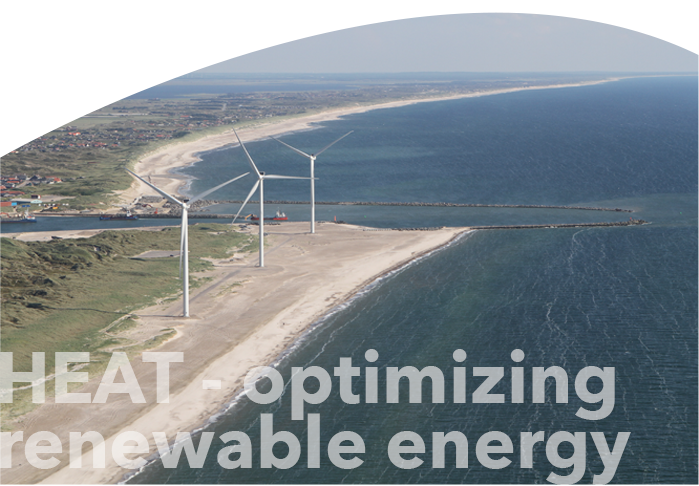 The HEAT pilot seeks to OPTIMIZE THE PRODUCTION OF REST-ENERGY from wind, solar and sea-based power systems by integrating it to the local heating system, thus greatly reducing the carbon footprint by introducing an intelligent heat pump system combining smart heat exchangers technology. The knowledge and results from this part of the pilot will have big relevance for ports wanting to play an active role as providers of green energy solutions to local users. As a central part of the development of the energy cluster, an “intelligent” heat pump and exchanger will be introduced, modified, tested and investigated in the project. The introduction will be done in cooperation with the companies in the business cluster of Port of Hvide Sande. Furthermore, the introduction of an internal transport solution in the port area will be sought, based on hydrogen generated by rest renewable energy (wind/solar/sea-based power) systems. This will minimise the carbon footprint and discharge of Sox and NOx in the local area. Experiences and results from DUAL Ports existing pilot HYDROGEN and the new SEA POWER pilot will be used in the process.

You can learn more about the Port of Hvide Sande in this video:

The HEAT pilot, a cooperation between Hvide sande Port, Hvide Sande Fjernvarme, Seabased and Uppsala University, has clear links with the HYDROGEN and SEA POWER pilots. Its uniqueness and innovation is the groundbreaking objective to use the electricity from an existing onshore wind mill and solar panel installed in the port area, as well as that of a new offshore wind farm planned for 2020 to feed a newly created heat system. This is expected to be later connected to the Hydrogen power derived from a wave energy plant, thus generating an integrated system completely based on renewables (instead of natural gas) and able to supply the whole Hvide Sande, with huge carbon reductions. The other DUAL Ports partners working on H2 and wave energy will cooperate by bringing their experience and knowledge on the technologies to be inter-linked in the system.