The hydrogen era of waterborne transport is getting nearer day by day at the Orkney Islands.

Approximately 2.1 billion people use ferries every year, putting the industry on a par with commercial airlines in terms of annual users worldwide. To many cities and their citizens, travelling the waterways lies at the heart of everyday life. 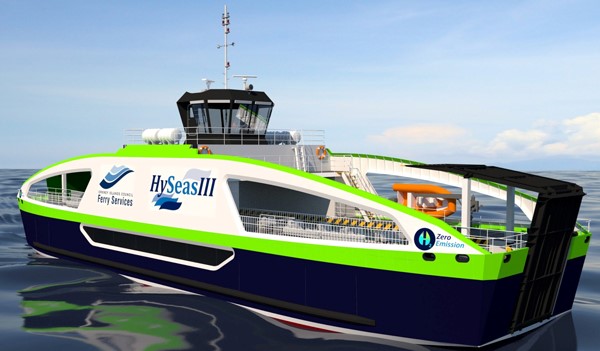 While some cities have mandated the switch to ‘fossil-free’ biodiesel, these vessels are still omitting harmful particles that cause numerous health issues to citizens. Despite a widespread push to reduce emissions, ferries have long been neglected in the drive to create cleaner, greener public transport in cities.

The European Commission has set out its vision to establish 100 climate-neutral smart cities by 2030, but this cannot be achieved without investing in new emission-free waterborne transport solutions.

The hydrogen era of waterborne transport is getting nearer day by day. But the switch from conventional ferry transport to Zero Carbon ferries raises a demand for training the seafarers.

At the Orkney islands the very first cohort of seafarers has been trained to work on hydrogen powered vessels have passed exams on a new hydrogen course.

Seven crew members from Orkney Ferries have completed the course, equipping them with the necessary skills to work onboard ferries powered by hydrogen, a zero-carbon fuel.

This follows on from an earlier course completed by the crew which focused solely on the handling of hydrogen as a cargo.

“It all went well, and everybody passed exam. The feedback on the training was good and the training made the crew feel secure operating a ferry powered by hydrogen,” said David Hibbert, Technical Superintendent Orkney Islands Council – Harbour Authority.

The hydrogen seafarer course, believed to be the first of its kind in the world, was developed and delivered in Orkney by Orkney College UHI’s Maritime Studies department in collaboration with Orkney Ferries and the European Marine Energy Centre.

The course covered a range of theoretical and practical aspects relating to the use of hydrogen fuel on board vessels. This included storage under pressure, safe working practice around hydrogen gas, bunkering, firefighting as well as operational and safety management procedures specific to the hydrogen equipment installed on the MV Shapinsay.

“The crew members have been very engaged in the training being very open for innovative solutions and changes in the way you operate a ferry. These changes are a part of the green transition, and the seafarer are very openminded for this change,” said David Hibbert.

The firefighting training took place at one of the Orkney ferries and the crewmembers were trained in how to detect hydrogen fires which are almost invisible to the naked eye by using thermal imaging, as well as the very specific ways in which fires are fought when hydrogen is present. 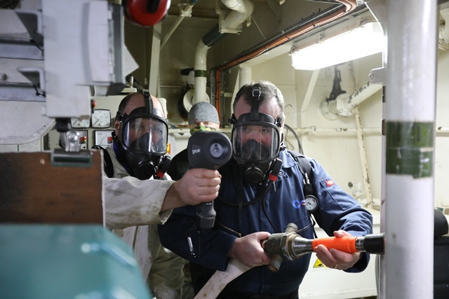 “The firefighting training simulated a fire in the engine room on the ferry. We did that by heating the engine room to simulate that it was on fire and the crew members initiated the fire fighting. It worked quite well,” said David Hibbert.

The new training will be a requirement in UK waters for working on vessels using hydrogen as a fuel and is an addition to existing international requirements under the IGF code (International Code of Safety for Ships using Gases or other Low-flashpoint Fuels).

“Now we have a starting point of a conversion course to be implemented in the future, when crew members on traditional powered ferries will shift from operating conventional ferries to the Hydrogen powered ferries,” said David Hibbert.

A new design of a hydrogen powered ferry is in the making. It’s planned to be put into commercial operation in 2023. The designs of a hydrogen vessel that will operate between Kirkwall and Shapinsay was revealed back in October 2021 and is awaiting final approval later this spring.

The Orkney islands produce more hydrogen than they can use, so the next logical step is needs so the logical step is to make transport fuel with this in the form of hydrogen. This potentially opens a significant new market for fuel cells, in the first instance the small lifeline ferries that serve remote islands and coastal regions which may also have similar renewable energy resources.

Hydrogen can be produced by electrolysis of water (H2O) by using an electric current to split water into its component parts of Hydrogen (H2) and Oxygen (O2).

Production of hydrogen uses renewable energy to power to the electrolysis of water.