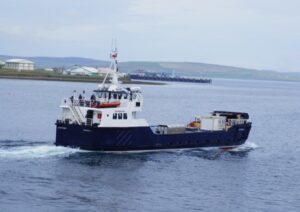 The MV Shapinsay – subject of the first training course

A course developed in Orkney to prepare local seafarers for working on and alongside hydrogen powered vessels has been approved by the Maritime and Coastguard Agency (MCA).

The approval represents a significant milestone in the Innovate UK funded HyDIME (Hydrogen Diesel Injection in a Marine Environment) project.

The HyDIME project is focused on demonstrating the use of hydrogen as a fuel in marine transport and will see the integration and trial of hydrogen/diesel injection technology on board the MV Shapinsay to power the auxiliary units of the vessel.

The course was developed by Orkney College UHI’s Maritime Studies department, based at the ‘Nav School’ in Stromness and covers such subjects as the specific characteristics of hydrogen and the design and use of the safety features required for storage, transport and consumption of the fuel.

The course, which follows on from an earlier training programme focused solely on handling of hydrogen, will be jointly delivered by both Orkney College and Orkney Ferries staff, providing a credible mix of theoretical and industry input for the best possible outcome.

The transition to zero-emission shipping is part of the UK Government’s Clean Maritime Plan.  Work undertaken through the HyDIME project to gain the necessary marine licences and regulatory approvals for hydrogen to be used as a fuel in a marine environment supports this, helping to pave the way for future marine hydrogen projects across the rest of the UK.

The hydrogen can then be used as a fuel for various end uses, helping to decarbonise across heat, power and transport.

Working with a wide variety of partners from the rest of Scotland, UK and Europe, Orkney is playing a pivotal role in the demonstration of green hydrogen technologies through a variety of projects including Surf N Turf and BigHIT, which will help in meeting carbon reduction targets and supporting the further development of renewable energy technologies.

Councillor Graham Sinclair is Chair of the Council’s Development and Infrastructure Committee. He said: “Once again, we see Orkney punching above its weight at the cutting edge of renewables. This latest development means that we now have the resources and expertise here in Orkney, not only to deliver the crews, vessels and local project management but also high-quality certificated training.

“It is significant that this training will potentially be rolled out nationally, based on the projects being developed right here.

“I congratulate our staff on the work they have put in to meet the very exacting requirements set by the MCA.”

Principal of Orkney College UHI, Eddie Abbot-Halpin, said: “Orkney College is pleased to be working in partnership with Orkney Ferries in delivering this innovative project, which contributes to keeping Orkney at the leading edge of development.”

The Orkney College UHI Maritime Studies Department, on its own pier in Stromness, has been training seafarers for over 50 years and works closely with the local renewables fleet and the industry around it. The department offers a range of short courses to meet the needs of the fishing and merchant-marine sectors and the latest regulations. The department also provides land and marine based engineering training, incorporating the College’s Engineering Department.

HyDIME is focused on the use of hydrogen as a fuel in marine transport and will see the design and integration of a hydrogen/diesel dual fuel conversion system on a commercial ferry operating between Kirkwall and Shapinsay.

The project will also gain the necessary marine licences and regulatory approvals for hydrogen to be used as a fuel in a marine environment which will have a significant impact on future hydrogen marine projects across the rest of the UK.

HySeas III is the final part of a three part research program that began in 2013 looking into the theory of hydrogen powered vessels (HySeas I), followed by a detailed technical and commercial study to design a hydrogen fuel cell powered vessel (Hyseas II 2014-2015). Several stakeholders has been involved in the project including the Interreg North Sea Region project DUAL Ports and Orkney College.

HySeas III builds on the first two parts by aiming to demonstrate that fuel cells may be successfully integrated with a proven marine hybrid electric drive system (electric propulsion, control gear, batteries, etc), along with the associated hydrogen storage and bunkering arrangements. The project will do this by developing, constructing, testing and validating a full-sized drive train on land. Should this test be successful, Scottish Transport have agreed to fund the building of a roll-on roll-off passenger ferry which will integrate the entire hydrogen/electric drive train which will be subject to extensive monitoring and testing. The chosen route for this innovative vessel will be Kirkwall to Shapinsay in the Orkney Islands.

The BIG HIT project was initiated in Orkney in Spring 2016. The project was designed to expand upon the concepts as developed by the Surf ‘n’ Turf project.

BIG HIT saw the installation of a 1MW hydrogen electrolyser on the Orkney Islands of Shapinsay, collocated with a 900kW curtailed community wind turbine.

Renewable electricity generated on the islands of Eday and Shapinsay is used by electrolysers to produce hydrogen, by electrolysis of water. This hydrogen is then stored as high-pressure gas in the tube trailers, which can be transported to mainland Orkney.

BIG HIT uses two state-of-the-art proton exchange membrane (PEM) electrolysers. The Shapinsay electrolyser is 1MW capacity and Eday electrolyser is 0.5MW capacity, both located close to the renewable generation assets. The hydrogen acts as an energy-storage medium which can later be converted back into heat and power for buildings and vessels in Kirkwall harbour, as well as the fuel for the operation of zero-emission hydrogen vehicles in and around Kirkwall.

Tidal power devices located at the European Marine Energy Centre test site at the Fall of Warness, in the sea just west of the island of Eday, and the Eday Renewable Energy community-owned onshore wind turbine, route their surplus electricity to a 500kW electrolyser, which generates hydrogen by splitting water.

The hydrogen is stored as compressed gas then transported on a trailer by road and sea to Kirkwall, the capital of Orkney. There it powers a fuel cell to generate clean electricity on demand.