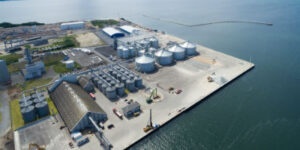 The Port of Vordingborg held their grand opening of the sustainable port expansion on June 22nd. The day was celebrated with an open event for the public, clients and official invitees.

It was a special day, when the Port of Vordingborg opened their new port area. The Mayor of Vordingborg, Mikael Smed, Head of Secretariat at North Sea Region Programme, Christian Byrith, chairman of the Danish Ports association, Ole Ingrisch and CEO of DLG, Kristian Hundebøll gave the opening speeches, focusing on the possibilities that the DUAL Ports project and the port expansion give to the local businesses, the city and the region.

De-velopment instead of de-commissioning

The Port of Vordingborg focuses on development as opposed to decommissioning, which is done by many other Danish ports. The visions of sustainable development now manifest themselves in a literal sense with a port that has become much larger in terms of area and has gained more water depth. Water depth and location are two crucial factors that make the port business attractive – both today and in the future with the establishment of a new Storstrøm bridge in the region. 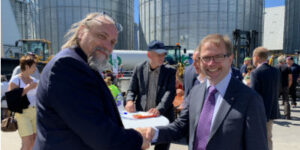 The Port of Vordingborg has received great recognition both nationally and internationally in the industry. The port expansion is part of the EU Interreg project DUAL Ports, where ports in the North Sea Region work together to develop methods and technologies that will make port operations more sustainable. Visionary and sustainable development is a valuable brand at a time when climate is in focus.

Investing in the port is an investment in the municipality

The Port of Vordingborg is happy and proud to contribute to the visibility of the area and to support both the local and general business development. There is great interest in the port from companies in relation to the opportunities that have arisen based on the port expansion and the port’s geographical location. Also, local associations, networking groups and educational institutions have shown great interest in the port, and there have been plenty of guided tours in the last few months. The interest in investment strengthens both the Port of Vordingborg but also has a spill-over effect elsewhere in the municipality.

During the day guest could take a walk around the port, learn more about the new bridge construction, that is taking place on the southside of the port area, see the port from the seaside on a military vessel, MHV 803. The DUAL Ports project was also represented at the port and talked to many of the visitors who showed interest in the international aspect.

You can see photos from the opening and read the article from a local newspaper, Sjællandske, here.

The event was also covered by Danish regional Tv2Øst – you can see clips from the day here.