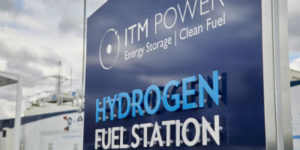 ITM Power was invited to present at a workshop organised by the Fuel Cells and Hydrogen Joint Undertaking (the main source of EU funding for fuel cells and hydrogen) on the 15th and 16th June 2017 in Valencia.

The workshop was organised to bring key players from the hydrogen and marine sector together, and included:

The workshop followed on from a previous workshop on Smart Specialisation held in 2015 in Lyon and took a closer look at maritime and port applications, with a number of sessions centred around the issue of hydrogen and fuel cell applications for boats/ships, logistics and stationary applications, as well as other aspects including safety and regulations and funding mechanisms.

“My presentation appeared to be well received. There were questions at the end regarding the expected price of fuel and whether to go with compressed or liquefied hydrogen. I went away with a much better idea of the priorities of port operators and the sort of pressures that they are under,” says Kris Hyde, Technology Manager at ITM Power, Partner in DUAL Ports.

ITM Power are highly skilled in refueling cars and buses, and the objective of the Hydrogen pilot within DUAL Ports is for ITM to design a hydrogen bunkering system and refueling station for ferries and large vessels. You can read more and follow the progress here.