On the 21stof February, the DUAL Ports project hosted a Hydrogen workshop at the Andromeda Hotel in Oostende. 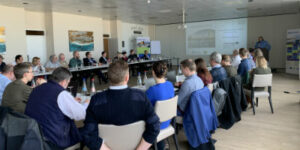 The waters were calm, and the view was fantastic when the Port of Oostende and DUAL Ports bid welcome for a day with a focus on the challenges and opportunities for hydrogen.

The workshop was a part of the DUAL Ports extension kickoff, where many of the new pilot-projects aim to implement the use of hydrogen in different aspects.

The day started off with a presentation from different international companies, that work in the maritime and shipping industry, or in the field of hydrogen. The question at hand was, is there room for hydrogen in the future of ports and shipping?

There was no doubt that hydrogen as an alternative fuel has many benefits. Made from renewable energy, hydrogen will be a zero emissions fuel, and will improve the global environmental issues, but also improve local carbon and noise pollution – benefitting the local community.

Hydrogen is already being used in different parts of port operations; for transportation of goods by rail with a hydrogen battery hybrid in North America, and for vehicular transportation in the Orkney Islands. Also, Kristina Juelsgaard from Ballard Power presented a reach stacker, that will come into operation in Valencia later this year, driven on hydrogen fuel cells. These are all examples of small-scale use of hydrogen as an alternative fuel. 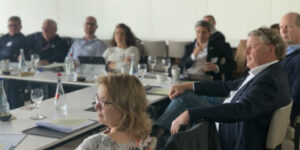 The main challenge of implementing hydrogen as a fuel on a large scale in the maritime and shipping industry is the obstacles of regulatory frameworks that are not adapted to the potential risks of hydrogen. There is simply a lack of specific rules concerning hydrogen, which create issues for storage and bunkering. Also, public opinion and customer perception is crucial to the progress. Charles Purkess from ITM Power argued that one of the aims of a large cooperation with Shell is to pioneer hydrogen as a mainstream fuel – the existence of hydrogen at the refueling station will increase awareness with customers, viewing hydrogen as a common alternative fuel.

At the end of the day the participants also took part in group discussions about the technical, management- and business-related issues for implementing hydrogen. The primary conclusions of the workshop were that the optimal conditions for the implementation of hydrogen in shipping and maritime operations will be the access to renewable sources for the production of hydrogen, advances in storage and bunkering facilities, and a large-scale demand will be a necessity for development – the crucial element is regulatory frameworks that adapt to hydrogen. Maria Brandsøy from the Maritime Business Association Flora in Norway described an electric revolution in Norway, which derived from the Norwegian Parliament’s decision made in 2015, that all ferries and new tenders had to be low or zero emission. As she argued, the same revolution could be possible for hydrogen.

You can see the presentations from the workshop here.